I’ve been using Strava to log my runs for about a month now, after having previously used a combination of Fetch Everyone and Garmin Connect for a number of years. About 4 years ago when I first got into running, I bought a Garmin Forerunner 405, which despite its downfalls (dodgy bezel, poor batter life, quirks picking up satellites) has probably been the most motivational piece of running hardware I’ve ever used.

The Garmin allows me to just stick on a pair of shoes and run out the door, recording where I go and then when I get back I can download all the data and store online, building up a profile over time and allowing me to see how well I’m doing.

But all that data is no good unless you can analyse it in a meaningful way. Being a bit of a geek, I love to see how far and fast I’ve run, and how much effort it has taken. Garmin Connect always allowed me to do this, but the interface was clunky and it was often very slow.

Strava does most of what Garmin Connect and Fetch Everyone does, but has more of a focus on the social and competition side of things. Its quite easy to find friends and link it via Facebook to build a profile and follow like-minded athletes.

Where it really comes into its own though, is its ability to crunch your run (or bike) data into segments, and allow you to name these so that when you run the same portion of the run again (or somebody else does) you can compare times.

The app is pretty good at determining segments from geographical data, but you’re also free to crop and change them yourself, which is quite handy as in some of the places I run there is not much on the Google map to really help Strava work out what is useful or not.

This is especially useful for me, since almost all of my running is on hilly trails, and I rarely run the exact same route twice. However I regularly do route segments, such as the hill sprint back into the village, or a particularly fast riverside forest run, and it adds a bit of extra motivation to know that I can go for a record or at least a good time on that section.

I run alone (well, with my border collie) and there aren’t many other people in my area so I tend to have the trails to myself. Its easy to get into a routine and not push yourself too much, but this is where the Strava challenges come in.

For the first 16 days of September, Trail Runner magazine hosted the Strava 100 Mile Trail Challenge, where they invited as many people as possible to log 100 miles of trail running between September 1st-16th. 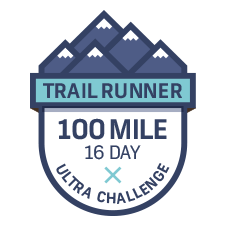 I entered this, and managed to log 102 miles before the challenge ended, and it turned out to be a great motivational tool. So far I’ve logged over 200km and we still have 9 days of the month left – by having the motivation to go out and run decent mileage every day I think I’ve managed to push myself that little bit further and discover that I’m actually OK with that level of effort – I’m definitely looking forward to the next challenge.

I love Strava, and have now stopped using my other sites as I think on balance this is the way to go. Although not perfect, Strava seems to have the right balance right now – what especially appeals is that unlike the hardware manufacturers (Garmin etc) who really are only interested in selling you a device, Strava is device-neutral, and they seem to be continuously driving development and rolling out new features.