Its been a while since I’ve run a marathon on tarmac. 3 years in fact. London 2010 was my first and only road marathon which I managed in a respectably 3:35. I was a bit of a wreck at the end, but the crowd were amazing and the time was decent enough to encourage me that I had room for improvement.

But then I fell in love with trail running. I turned my back on road races and headed for the hills. The Greensand Marathon, Pilgrim Challenge, Ultra Trail du Vercors, Midsummer Munro, The Beast – all of these  were much more to my liking – hundreds, not thousands of runners, stunning locations, and lots of hills. The closest I came was a marathon in Richmond Park.

However as time went on, and my running in the hills improved, I was curious to see how this might affect my road running. Common running folklore says that ultra running, trail running, mountain running – all the offroad stuff – is not conducive to fast marathon times on the flats. So I got the itch to test myself again, and picked Paris.

Pre-marathon preparation is always difficult. As running lore and common sense dictates, there’s not much you can do in your final week to improve your race performance, but there’s a hell of a lot you can do to mess it up. With that in mind, during the week of the race I went out on the Tuesday evening to run a fast pace with full marathon kit, complete with carrying gels and running in the gear I would race in. I probably went  a little too hard but luckily had enough time to recover the sore quads in time for the race.

A quick run round the village on Saturday morning with the dog, and then it was on the TGV up to Paris. Our hotel was in the SW of the city which was quite convenient for the Marathon Expo at Porte de Versailles, where I went to pick up my race number and goody bag. Once I’d emptied all the flyers and other crap from my good bag, the only items of any discernible usefulness were a bar towel, and a bag of pistachios. Note to organisers: For 65 euros and upwards – could do better.

Anyway, I made my way through the expo as quickly as possible – it was full of people trying to sell running gear or get you to sign up to other marathons. There was a rice party for last minute carb-loaders but I’d brought my own pasta (taking no chances with restaurants and food poisoning) so I headed back to the hotel to stuff my face.

I managed to get a reasonable sleep despite the rumble of the RER trains and trams right past the hotel, and was up at 6 to wolf down some porridge and get the Metro to the start line. When I surfaced at Place de Charles de Gaulle, the sun was up and the place was swarming around the Arc de Triomphe. It was damn cold though, so left it until the last minute to drop off my bag so that I could keep my tracksuit on for as long as possible. 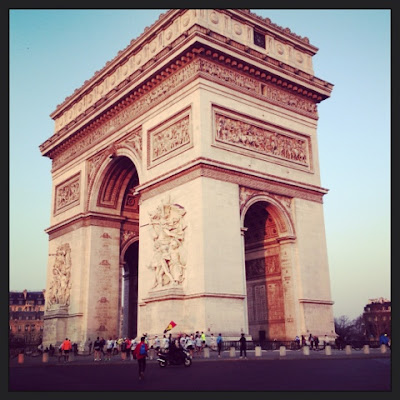 The marathon route is basically a squashed loop, heading out from the Champs Elysee, down to the Louvre and heading east to the Bois de Vincennes park. It loops round before heading back west along the Seine, to the Bois de Bolougne, and then finishing on the Avenue Foch leading back to the Arc de Triomphe. This meant that logistically, our bag drop was at the finish (unlike say, London, where they transport your bags to the end).
I was in with a predicted time of 3:15 so had to get to one of the start pens at the front. The Champs Elysee is a pretty wide avenue, and all of the road was penned for runners, with the side pavements used to get to the start gate. However it soon became a huge crush, as 50,000 runners tried to find their place. I managed to get into my start pen with seconds to spare, so no real time for a warm up and feeling pretty stressed. I really shouldn’t have left it so long until I dropped my bags.
The pace kicked off pretty quickly as usual, but the first 10km were pretty crowded. The weather was perfect, clear and cold with little wind and we soon warmed up. I chatted to ‘Richard from Portsmouth’ who was aiming for a 3 hour time so we made conversation as we passed our way alongside the Louvre, the Rue de Rivoli and out east.

The course really was quite flat and fast, and being so straight we soon made it out to the Bois de Vincennes, a huge park just outside the Peripherique on the eastern side of Paris. The course looped through there from about KMs 12 to 19, and being so far out, the crowd support dropped a bit with a few gaps, but there were plenty of people around the KM markers, and lots of casual support from people out walking their dogs on a  Sunday morning.

After the Bois de Vincennes, the route snaked back towards the centre of Paris, along the river Seine. We passed the halfway point and I was still feeling strong, averaging around 4.17min/km which I knew was a pace of just over 3 hours for the whole race – however I was aware that keeping that up for another half marathon was not going to be easy. My time at the halfway point was 1hr 29m 55sec – my first ever sub-90 minute half marathon – I was pleased, but a bit worried I was going too fast.
Coming back into town and the crowd support really increased. A beautiful, sunny day on the banks of the Seine, with the Eiffel tower in the background made it an amazing experience. But then came the tunnels. There were about 3 or 4 tunnels of varying length, each of which dipped very sharply, plunging us into a humid and bizarre dark world, before forcing an uphill run out back into daylight.

I really started to flag at the end, after the 35km mark I was getting the usual cramps pinging into my calf muscles whenever I ran too fast so my pace dropped.

40,108 runners left the Champs Elysee at the start, and 38,690 crossed the finishing line. I came 1,926th in total, with an official time of 03h08’12”. My best marathon to date, and tantalisingly close enough to the magic 3 hour mark that I’m tempted to have another go.
If you’re thinking of a marathon, you could do a lot worse than Paris. The organisation was pretty spot on considering the huge field of runners. The route was magnificent, crowd support was good and the fact that the start and end is pretty much in the same place is a big plus. Its much easier to get a place, not being as heavily subscribed as London, and also gives you a great excuse to visit Paris.