I signed up for L’Etape du Tour last year before we moved to the French Alps, full of enthusiasm that having the mountains on my doorstep would mean that I would get out on my bike often and be properly fit and aclimatised by the time 8th July 2012 rolled around.

Well, it didn’t quite pan out that way. With a combination of work commitments, getting a dog, and rennovating a house, and niggly injuries my cycle training prior to the Etape amounted to around 50km on the local roads, 30km of which were done in one ride last week! However, I’d entered with my ex-colleague Mike, who was making the trip out from England, and emboldened by a plucky British spirit and a stubborn reluctance to consider the facts I decided to do it anyway.

Well Acte 1 is a bit of a monster as you can see from the profile. One of the toughest stages of this year’s tour, it includes 2 Hors-category, a 2nd and first category climbs. Quite simply, after the first 16km rolling out Albertville there is hardly any flat section left on the course.

Anyhow, I drove up on Saturday afternoon, taking the car to the top of La Toussuire where the stage would finish. I made the mistake of driving the last 5km of the actual course, rather than taking the short cut to the ski resort and it seemed pretty viscious. After dropping the car and taking the shuttle bus to the Etape village which was set up in the Olympic park from when Albertville hosted the 1986 winter olympics. I met up with Mike and we picked up our race numbers and goody bags.

The temperature down in Albertville was in the low 30s, and we sat sweltering in a huge hanger type building eating our generous portions of pre-race pasta. After that it was a half hour drive to our Formule 1 motel – not the best accommodation in the world, and hot night with no a/c meant I wasn’t exactly rested when the alarm went off at 5.20 the next morning.

The heat of the previous day had disappeared and was replaced with the pouring rain. A quick breakfast of baguette, jam and bananas sat under the hotel awning with other riders and then a ride to the start of the race.

There were 9,000 entrants in this year’s event but having the Olympic Park in Albertville to start from meant that it all went pretty smoothly. The rain eased off to a steady drizzle with a promise of better weather to come in the afternoon. 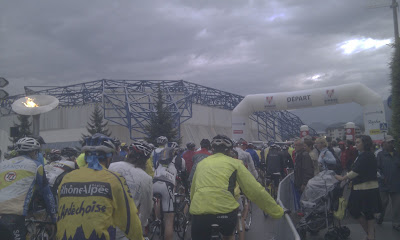 Either way, it was rain jackets on as we rolled out of Albertville. Despite the crap weather and early hour there were quite a few people on the streets of the town centre cheering us on, and the flat roads and cool conditions meant we got a good warm up.

Pretty soon though we arrived at the foot of the climb to the Col de la Madelaine, and things started getting difficult. I’ve done a few of the local roads round our way but this was the first time I’ve ever climed a sustained 6-10% gradient for 20-odd kilometres, and it was a tough couple of hours in the saddle. I stopped at the feed station half way up which was probably a mistake, because getting going again was tough. However I seemed to manage to be able to sustain around 10kph and eventually made it to the top of the Col de la Madelaine. 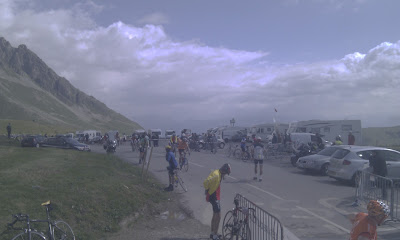 By now it was around 11am and the sun had come out and the roads had dried up, so the upcoming 25km was less unnerving than I was originally expecting. However at over 2,000m at the start, it was quite chilly and hitting 60-70kph on the downhills (plenty fast enough for me) for 25 minutes was quite an effort (again the first time I’d ever done that kind of descent). Keeping on the breaks into the corners was very tough on the hands and arms, and my fingers and thumbs went numb on the way down with a combination of windchill and effort.

Getting down to the valley floor meant it was time to warm up and rest up – we used the separate feed station provided by the guys at La Fuga, so it was great to be able to top up with electrolytes, leave my rain jacket (it was forecast to be hot, even on the descents, for the rest of the day) and slather on some more factor 50 before heading out for the next climb, the Col du Glandon, and Croix de Fer.

The Glandon was another monster, but after being softened up by the Madelaine climb, it was even harder. The day was getting very hot, and the hardest part of the climb, towards the top was above the tree line and so provided no shade. The final 3km also blew in some fierce headwinds which added to the misery. Throughout the whole ride the camaradarie had been excellent, with a lot of chatting and banter in the peleton, but on the upper slopes of the Glandon it was eerily quite as people dug deep to make it to the top.

I finally made it to the top – I teamed up with a French rider who was struggling too and we encouraged each other to the top. The Col de la Croix de Fer was next, but this was just another 2.5km and is not quite so steep, so felt a lot more straightforward. However things were complicated by several hundred sheep that were wandering across the road, and I had to do an emergency stop and unclip and a border collie wrangled a herd of goats straight towards me and engulfed me. 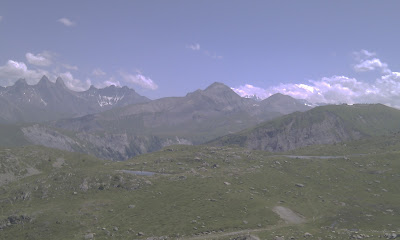 It was much warmer on this descent and I was much more into my stride. The route soon kicked up again with a climb to the Col du Molland, and this was were a lot of people I think were starting to crack. Another big descent, and after 20 minutes of brake-pumping and ear-popping I was down at the valley floor, where the heat and humidty were hugely noticeable after the fresher conditions up high.

Another quick food stop at La Fuga and it was time to start the final climb of the day – 17km up to the ski resort of La Toussuire-Les Sybelles. Mike went on ahead of me as he was feeling stronger, but I was having my doubts as I was pretty close to exhaustion. I started the climb but after about 3-4 km of struggling, the gendarme at the back of the race passed, saying the broom wagon was approaching, and did I want to get on, or finish? Well I’d been riding for 11 hours, and was overheating and exhausted, so I took the option to get off my bike, sit in the shade and wait for the arrival of the broom wagon. I was only 15km from the end but I was under no illusion about how hard they would be and I was pleased to have made it as far as I did.

My Garmin GPS ran out of battery after 6.5 hours (just before the top of the Glandon, but you can see the data below for the times before that.

Despite the agony and hard work, it was a memorable day with great organisation and a fantastic spirit between the riders. I was amazed by how many British riders were there, and how many union jacks were flying on the roadside – maybe its the Cav/Wiggins effect but it was great to so many of us participating with the rest of the world.