The race start at La Faurie

The first edition of the Trail des Cimes du Buech took place on Sunday, and so I went along since at 17km and 950m +/- it was short and steep enough for me to feel like I could properly ‘race’ it, rather than just try to complete the distance. Since it took place in La Faurie, a village just 20 minutes drive from me, it made sense too.

The route comprised of a loop, climbing the mountains above La Faurie, running along the ridge with an ampitheatre to the east, and opening up to the rolling hills of Haute Provence to the southwest. The entire route was on eithe forest single track or 4×4 roads, with some steep climbs and technical descending. Around 60 runners made it to the start line, and I made a conscious effort to get to the front early since the first 800m or so were fairly flat, but with a bridge and some single track it would quickly become a bottleneck, so by the time we reached the first climb I was in around 12th place. 10 minutes into the climb I’d made up about 4-5 places and settled in at 5th place. It stayed like this until the final summit, until the runner behind me showed how the skill of technical descending can really make a difference. He overtook me and I lost 2 minutes on him in the final 6km to the finish, coming in in 6th place with a time of 1hr 46. Descending through the forest down to the finish line

This week I was lucky enough to be in the beautiful Spanish city of Seville for work. It was a busy programme and we spent most of our days in doors, but we got to see the sights at night and enjoy Spanish food and drink.

On the first morning I managed to sneak in a run along the Guadalquivir river which was a great way of getting my bearings, and seeing the city before it got too hot and croweded. I hoped to get out again but I was just unable to get up early enough in the mornings!

The palace in the Plaza Espana – amazing at dawn.

More of the amazing gardens in the Plaza Espana

View from the river 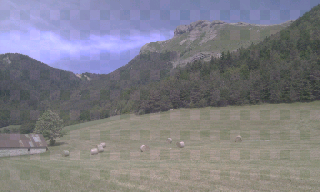