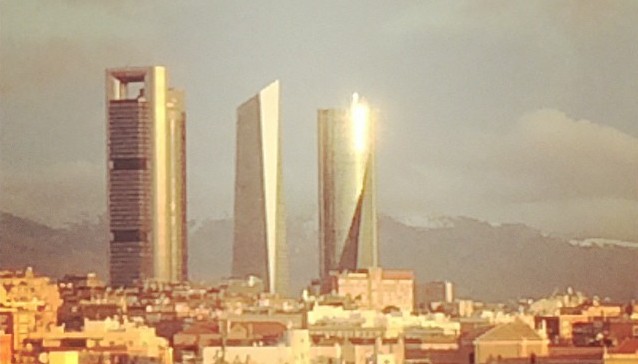 I’m just about to fly out of Madrid Barajas airport after spending slightly less than 20 hours in Spain. Arriving late last night, and staying in a hotel on the edge of town close to the office where I’ve been booked with meetings today, the only way I was going to get to see the sights of Spain’s capital was to set my alarm for 6am, put on my running shoes and run out for a loop.

I’ve never been here before but a quick look on Google Maps shows that I was situated quite a way from any of Madrid’s central attractions. A bit of research shows that there are plenty of decent places to run, but these were mostly spread out and I wanted to loop around the whole city.

Coming here in the middle of an Alpine winter, leaving the hotel at 6.15am in 9C temperature felt pretty nice.

Navigating Madrid in the early hours is easy – it’s mostly long, straight avenues that run N/S or E/W so I was able to link my run from the hotel, down to Parque del Retiro. It was still pitch black by this point though so there wasn’t much to see.

Parque del Retiro
This park is right in the centre of Madrid and is well worth a visit whether you’re running or otherwise. It belonged to the Spanish monarchy until the 19th century when it became a public park.

From here I followed Calle de Atocha northwest up to Plaza Mayor, a grand town square but at 7am it was pretty deserted and unlit. Carrying on through I finally reached the Palacio Real just as the sun was coming up, and I was finally able to snap a photo!

I had originally hoped to head west to the Rio Manzanares where 10s of KMs of pedestrianised routes make for good running. Further northwest also is the Casa de Campo which is another very popular spot for runners, but I had meetings to get to and not enough time to extend my route, so had to head back.

Casa de Campo
This is the largest park in Madrid, on the west bank of the Manzanares and is a former royal hunting estate.

The park covers 700 hectares so you can imagine it’s quite a haven for runners, but is also quite busy with tourists and locals alike since there’s also a zoo, amusement park and aquarium.

Getting back takes longer than heading out – the huge empty avenues that I was able to cross easily in the early hours where clogged with morning rush hour commuter traffic, meaning frequent stops at the crossing lights. As I got back to the hotel the sun was just getting up and I was treated to this view from the hotel room window.

View of the northern skyline of Madrid from my hotel window

This week I was lucky enough to be in the beautiful Spanish city of Seville for work. It was a busy programme and we spent most of our days in doors, but we got to see the sights at night and enjoy Spanish food and drink.

On the first morning I managed to sneak in a run along the Guadalquivir river which was a great way of getting my bearings, and seeing the city before it got too hot and croweded. I hoped to get out again but I was just unable to get up early enough in the mornings!

The palace in the Plaza Espana – amazing at dawn.

More of the amazing gardens in the Plaza Espana

View from the river