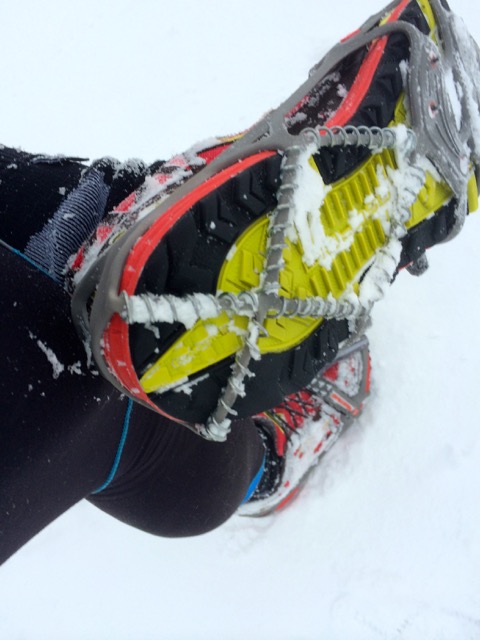 It’s deep winter in the northern hemisphere again and for many runners that means snow and ice. There are many options, ranging from taking an off-season and not running at all, sticking to indoor treadmills, or just braving the elements and hoping for the best. A number of manufacturers have started to develop traction devices for this last group and this review looks at the run-specific YakTrax Run.

Note: unless otherwise stated, all products reviewed on this blog are owned by me, and have been paid for myself and so are completely independent.

For the last two winters I’ve been running with the YakTrax Pro which I reviewed last winter. They’ve served me well but unfortunately I lost them somewhere in our barn over the summer – at least I wasn’t able to find them in storage, so I ordered some more, only this time I went for the run-specific YakTrax Run.

I found a retailer on Amazon selling these for around €38, which at currently exchange rates is pretty close to their MRP of $39.99.

Both the YakTrax Pro and Run models share the same basic construction. They consist of a rubber outer frame that fits around the heel and toe of your running shoes, and a velcro strap across the toes to secure it in place.

On the sole of the shoe are metal coils that lie flat along the bottom of the shoe and provide the traction. The difference between the YakTrax Run however is a formation of small spikes on the ball of the foot, in place of the extra coils on the YakTrax Pro.

The spikes on the front of the YakTrax aren’t sharp, but are enough to give traction on ice when combined with the force of a forefoot strike. From my previous experience with the YaxTrax Pros I knew that the coil system would offer good grip.

Both the YakTrax Pro and Run can handle short periods of snow/ice free pavement without any obvious damage to the devices, although you wouldn’t want to do this for long periods of time – they can be taken off and put back on in 30 seconds so are not too bad in mixed conditions. They’re also guaranteed for wearing down to ‑41°C, although hats off to anyone who actually does this.

We’re in the middle of an Alpine winter up here in the southern French Alps, and that makes running difficult, but would be a great testing ground for the YakTrax Run. This week has had everything – following on from the heavy snowfall of the previous weekend, the roads were ploughed but with sub-zero temperatures they were packed and icy. Later in the week, it was clear and sunny all day and the ice melted, and then would refreeze each night making early morning running very treacherous.

This was topped off by last-night’s huge snow storm and high winds which scattered the frozen roads with drifts of snow, and filled the forest single track with deep powder. The YakTrax Run in action

When I first took out the YakTrax Run it was very icy and the roads where hard packed down. These were perfect conditions and they gripped everything beautifully, both up and down hill. I was able to run with confidence and after a while it was easy to forget how slippy the icy actually was.

Yesterday we had heavy snow, but it was fairly wet and not very cold (just around freezing). This was then cleared and packed down by the snowplough and froze solid overnight to leave a layer of ice on the roads. We had heavy fresh snow overnight on top of this, and 80kph winds blowing in from the north meaning the roads where deep powder one minute, sheet ice the next, or a mixture of both. However the real weakness of the YakTrax Run was the short spikes on the front. When running on roads where there was a real mix of ice and powder, I lost my grip a few times when landing on my forefoot as the snow would grip into the spikes, be packed down but then slide as a whole over the ice. Running with my weight on my heels gave better grip in these conditions as the coils at the back of the YakTrax came into play. This picture shows the road up to the village campsite – grip was good on the ice, but where the snow had drifted to powder on the left I would lose grip as the spikes couldn’t penetrate to the ice – the coils at the rear gave better traction.

Next, after getting off the roads and into the forest there was only deep powder to contend with, and to be honest a traction device makes absolutely no difference here since the compaction of the snow gives all the grip you need. Once you get into deep powder snow, traction devices pretty much become redundant.

Overall these are a good addition to anyone who wants to get outside when it’s cold and frozen, and as the fall I took in December, smashing up my knee and ripping up running tights attested, running on ice without help isn’t a great idea.

As I noted, the biggest weakness here is the spikes at the front of the device – having used the YakTrax Pro in similar situations I would say I prefer them for the kind of mixed conditions I encounter. If you’re more likely to be dealing with ice rather than packed snow, then maybe these would be fine. However I actually prefer the YakTrax Pro for my winter running, which at $29.99 cost significantly less. Evening hike up to the Col Vert. #vercorsphotos #

Autumn is properly getting underway in the mountai

After work run up to the Pas de Bellecombe. #verc

Back where the French adventure started. #mountain

The mornings arw getting misty and autumnal now.