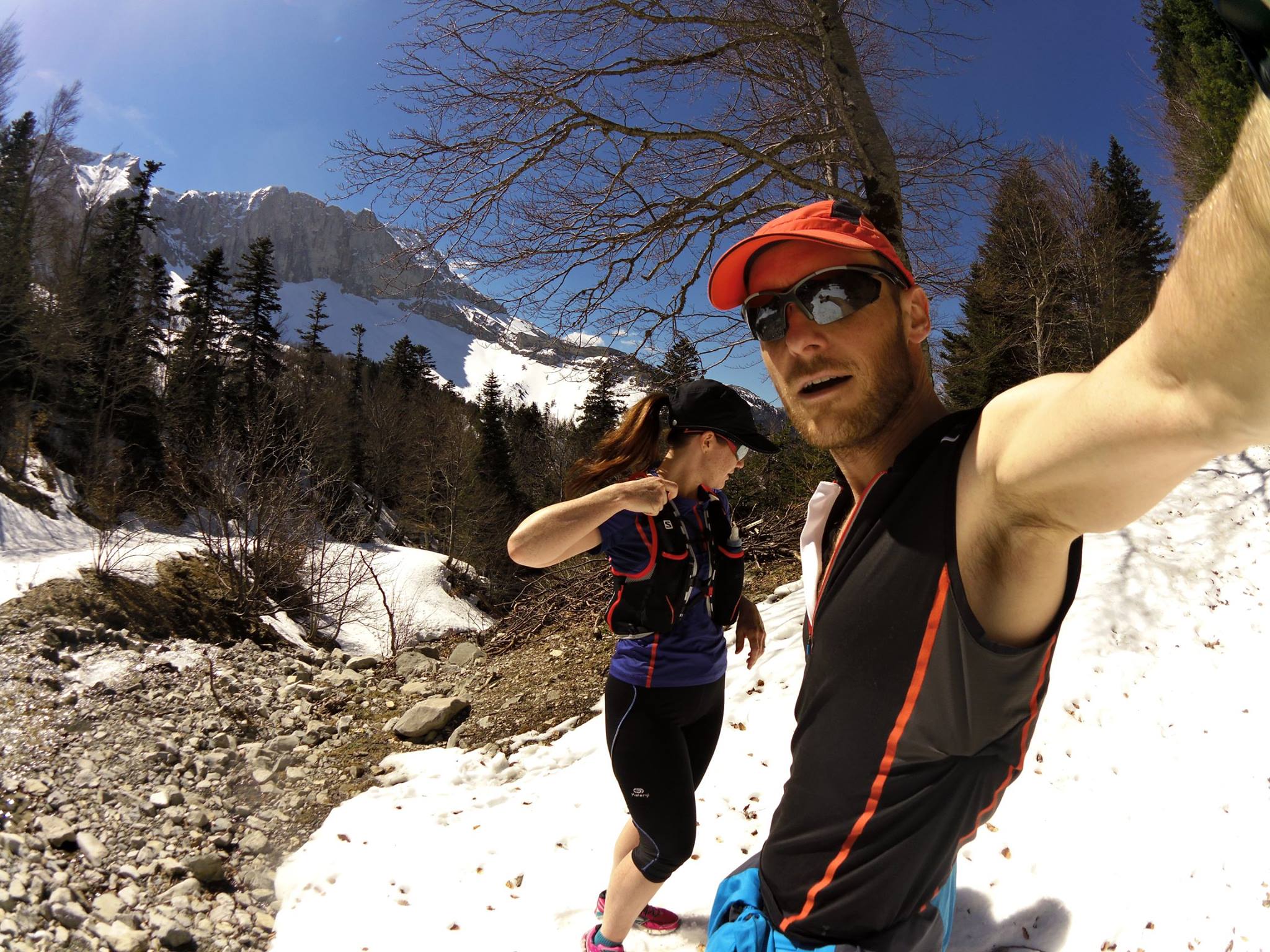 At the end of our valley is the largest mountain in the area – the Grand Ferrand. At 2,758m its not the biggest in the Alps, but at over a vertical mile above our valley floor, it presents quite a challenge to the aspring trail runner, and has quite an imposing presence over the end of the valley.

All year I had been running along the trails at the end of the valley, and up into the foothills of the Grand Ferrand, only to be turned back by too much snow. My run on Friday morning was meant to be just another 10km jaunt, but to my surpise I found the snow had melted enough to allow me to get up above the treeline and onto the mountain proper.

Rather than run up to Lac du Lauzon, I decided that I would traverse across the face of the mountain and head towards Col de la Croix, which passes the local sheep pastures, and then descend down into the forest and create a loop.

Since this was early spring, and very few hikers had made this route yet, after taking the branch I immediately lost the path and ended up scrambling up through rough undergrowth until I came out over a ridge and onto the steep, grassy pastures of the Ferrand.

I realised I was too high for the trail that cuts across, so decided to head across the slope and descend until I found it. The slope was a good 50º and quite slick with the morning due so going was tricky. I was busy watching down the mountain and at my feet, until I caught a glimpse of movement and looked up the slope to see a Chamois running towards me. It suddenly saw me, and startled, ran away for another 100m before looking back at me. I managed to snap a picture with my phone but it does no justice to these amazing animals – I was struggling on the terrain and it was running around as if it were on the flat.

After descending down another couple of hundred metres I found the trail, which was pure trail running Nirvana, high above the treeline, with a fantastic view back down the valley into La Jarjatte.

Into the sheep pastures, which in a month or so will be full of flocks, guarded from wolves by Patou dogs.

Still Too Much Snow

March 25, 2012 jamie Leave a comment
I’ve only been running in the French Alps for a couple of months, and so far I’ve not ventured up high as the weather has been poor and there’s too much snow. However we’ve had a few weeks of fine, warm and sunny weather, and all of the snow has gone from valley level. Looking out of my office window, I can see the Grand Ferrand, the largest mountain in the area, and an ultimate goal.

However I figured the whole vertical mile to the top might be a bit much for now, so I set my sights a little lower, and decided to aim for the shepherd’s cabin at Le Fleyrard. This is about 500m up the mountains, and marks the upper limit of the treeline. From there, there is a track that traverses the front of the mountain, leading to the sheep pastures, from where it is a downhill run back into the valley via the Col de la Croix.

I started the run at the end of the day, and the 4km run along the valley, along the river Büech was a joy. Late in the day, the sun was setting creating a great effect as the sun caught the trees and the snow.

As I headed to the end of the valley, I passed quite a few walkers coming off from a day’s hike on the mountain.

Egged on by a few ‘bon courage’ from passing hikers, I managed about another 300m of vertical before I had to turn back because of too much snow. Descending in thigh-deep, crusty snow was even tougher than climbing, and I got stuck a few times and took the odd tumble.

I reckon another 2 weeks and I’ll be able to get up past the Fleyrard shepherds cabin and up onto the Grand Ferrand proper.

Only 7 weeks until the #utmb so the next few weeks

Finally after 16 months - running in the mountains