The skyline above my village is recognisable by the distinctive shape of the Col des Aiguilles, the pass that connects the La Jarjatte valley with the Dévoluy range of mountains. It’s this col that gives the name to last Sunday’s race so this race felt pretty local to me.

Unfortunately, despite just being a few KMs as the crow flies, it was nearly an hour as the Volvo drives, such are the vagaries of Alpine roads. Still, being able to leave the house at 7.30am felt like a lie in compared to some other races I’ve had to get up at an ungodly hour for.

At only 16km, the Trail de la Traversée des Aiguilles was the shortest in the Challenge Trails 05 series, but with almost 1,000m of vertical it wasn’t going to be easy. Despite autumn being underway in the Alps, it was a beautiful weekend and Sunday morning was perfect for racing, with cool temperatures (that soon warmed up when the sun came out) and dry conditions. A sea of cloud in the valley below in Dévoluy, taken from the Col du Festre, warming up before the start of the race

The bib number collection was inside a small cafe on the Col du Festre, which was pretty crowded but had the added advantage that they served a great espresso. Pretty soon we were ready to start, and all 120 runners were off.

I’d had a couple of days off during the week while I recovered from a cold, and during my first run back on Friday I felt knackered and really struggled on the hills, so took it easy on Saturday. I had the illusion of feeling fresh, but pretty soon had to dial it back in.

The route climbed first to the Cabin de Rama, a refuge I had passed before on a training run so the early trails were familiar. Soon however, we headed up to the Col des Aiguilles where after some great running in the lower, flatter sections, it soon got very steep. With the Col in site, the race leaders were starting to descend back down into the valley towards the rest of us. Despite running flat out on technical ground, most of them were full of encouragement to those of us slogging up the steep slope with cries of “Allez-allez!” and the odd “bravo!” chucked in for good measure. The cairn marking the top of the Col, and the border between the Drome and Haute-Alpes departements. When I got to the top, I could see my house down the other side, just 4km away, but still had 9km to run to complete the race.

At the top of the Col, a marshall marked out race number to prove we’d made it – a quick glug of water from the drinks table (fair play to the marshalls for dragging water up to the top – even a 4×4 couldn’t get up there) and it was time to descend. This was probably when I should have put my iPhone away and not worried about trying to get some pictures. It doesn’t look too steep in the picture above but behind the guy in blue climbing upwards, it drops away quite steeply (which is why you can’t see the lines of other runnres). I overcooked it a little bit and had to stop myself running away out of control. After the Col there was another steep climb but some nice traverses in between. Back at the Cabine du Rama we retraced our steps a little bit, and I got lost at one point, leaving the trail after I missed a marker, and it was only when I saw another runner up above that I realised I’d gone wrong. I climbed up the side of the hill to rejoin the trail, managing to fall flat on my face in the process and defiitely lost one, maybe two places that I wasn’t able to make up. A couple of KMs before the end, the race routed into and through a barn which was full of lambs

Anyhow, I got myself back to the finish in just under 2 hours – 31st place. 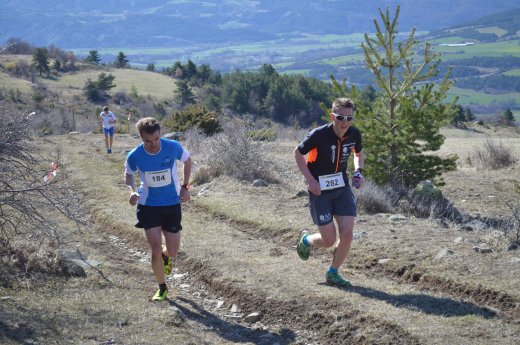 After my first race a couple of weeks ago in snow and fog, I was looking forward to a drier and brighter run in the southern Alps, and last Sunday’s Trail des Contreforts de Piolit didn’t disappoint. The race was 17km of pretty much straight up then straight down racing along the foothills (the contreforts) of Le Piolit in the Haute-Alpes of southern France.

The race profile – pretty much straight up and down with a few bumps here and there. The route was extended to 17,3km

The race has been going for five years, and based in La Bâtie-Neuve between Gap and Chorges, this was always going to attract a large and strong field of mountain runners and this year didn’t disappoint. 300 runners signed up for the main event with another 200 running a smaller 6km version.

Finding my way to the event was slightly problematic – I just rocked up to the town assuming there would be event signposts, but it wasn’t really clear where the race was. I saw a guy in running gear walking into a building full of people filling in bits of paper so followed him – and almost ended up voting in the French local elections. After sheepishly getting some new directions I soon found my way to the local college that was hosting the event and picked up my race pack and got ready.

The weather was perfect for racing – blue skies and temperatures in the low teens with little wind – a perfect Spring day in the Provençal Alps.

As with all of these events there’s usually a big bottleneck as soon as the race hits the trails so I positioned myself reasonably close to the front of the start line hoping not to get stuck too far back. As soon as the gun went off everybody sprinted and jostled – I nearly went face-first into the tarmac after 500m as somebody clipped my heels at full speed but I just about managed to stay on my feet. After about 800m we started to hit the trails and the going got steeper. Although the the trail was mostly dry, this time of year there is still a lot of snowmelt in places and some patches were boggy and due to the crowded trails it was difficult to avoid much of this meaning feet got wet and muddy quite early on. An easy section, so I was able to take a photo. The trails were much more technical in places but that wasn’t the time for whipping out my phone.

There were two ravito (food) stops serving water, Coke and other drinks, as well as bananas, chocolate and dried apricots. For such a short race this seemed more than necessary but it meant I could race carrying nothing but a couple of gels, that I could then wash down with water at the aid stations. The aid stations were frequent and well stocked for a race of this size. Photo courtesy of www.traildescontrefortsdepiolit.fr

The going underfoot was dry and gritty in places, and mixed with the boggy conditions earlier on I was getting blisters on my feet – I was wearing my new Brooks Cascadia 10s which I’d only put about 30km into previously, so this made the descent painful as it was quite technical and steep. Gaël Reynaud (right) who was the eventual winner, beating the course record with a time of 1:14:30. Benjamin Rouillon (left) got 2nd place just under 2 minutes behind. Photo courtesy of www.traildescontrefortsdepiolit.fr The last couple of KMs were fairly undulating and I was able to make up about 4-5 places by passing a few people who were starting to blow up. The final 800m into the village and the finish line had some good crowds and still plenty of cheering going on despite the winner having crossed the line 15 minutes earlier, which helped motivate me to the finish. I eventually crossed the line in 1:33:57 – quite some time behind the winners but I’m quite happy with the result considering the strength of the field.

Overall it was a well organised and exceptionally scenic race – with plenty of food stops, plus a meal for all finishers it was also good value.

Full race results can be found on the GeniAlp website.

I was keen to enter this race since it’s part of the new Challenge Trails 05 ‘league’ system. 10 trail races in the Haute-Alpes (05) departement this year, between 16-32km are scheduled, with a points mechanism where the winner is awarded 600pts, and then each finisher afterwards is awarded a decreasing number of points. The best 5 finishes of the year are taking into account on the overall leaderboard. It seemed like a good way to add some motivation and to find some local races for me.