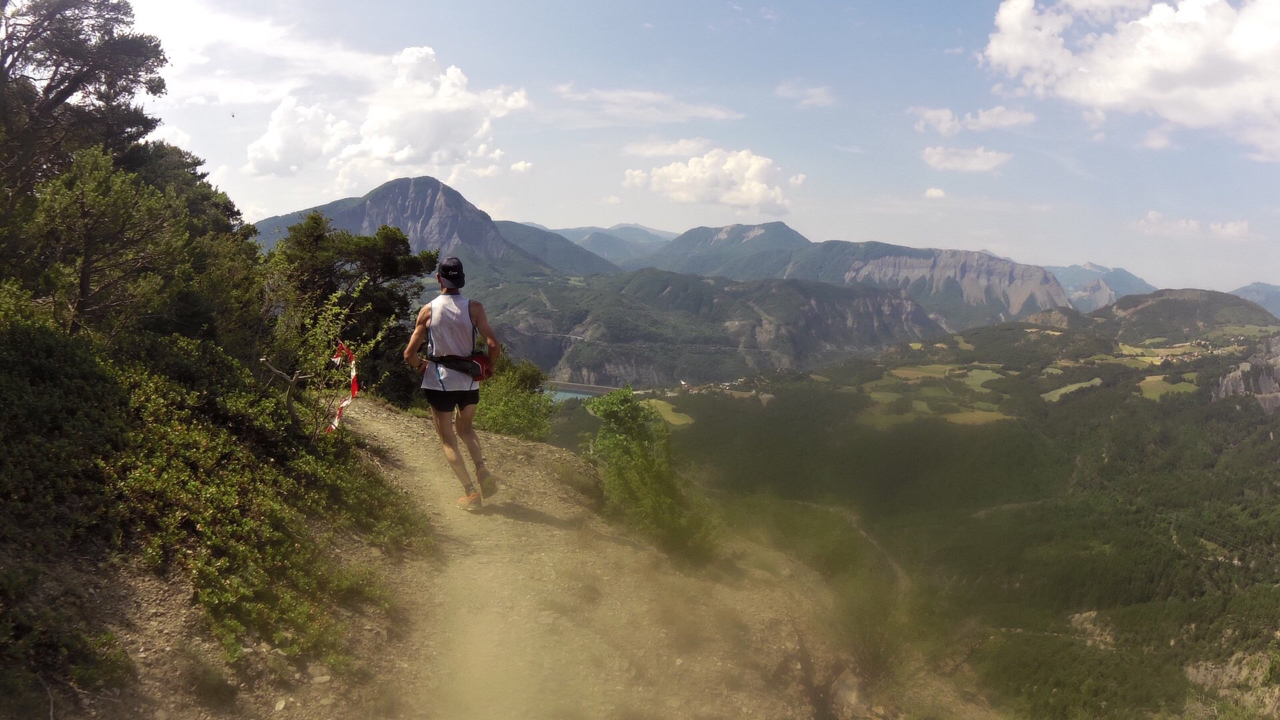 It was a wonder I ever made it to the start line of the Trail EDF Rousset, since I’d managed to add it to my training calendar for the wrong week, expecting it to be the following weekend. Luckily my wife noticed and reminded me which is a good job, as it was a fantastic event that I’m hoping to come back and do again next year.

Lac de Serre-Ponçon is an enormous artificial lake in the Haute-Alpes, just east of the town of Gap. I’ve been there a few times and we’ve taken our kayak out onto its beautiful blue waters in the summer. The lake is created by the damming of the Durance and Ubaye rivers that flows down from the Alps, and provides irrigation and hydroelectricity to the surrounding area. Needless to say its a dramatic and scenic location for a trail race.

The course profile – around 1,600m of cumulative elevation over 32km of trail

Along with the main 32km race, with around 100 participants, a shorter 22km race, and an 8km hiking race were laid on using parts of the same course. The hail stones from the previous evening didn’t give me a good feeling about the course conditions, but I needn’t have worried.

The race started at 8am, and is a good 90 minute drive from my home, so I had to get up at 4.50am to give myself enough time to get there and collect my race number and warm up for the start. The day before was exceptionally hot, followed by a huge thunderstorm that brought huge hail stones raining down on us. When I left my house early on Sunday morning there were still piles of hail stones everywhere.

However, out on the race course, although more thunderstorms were forecast for the afternoon, the course was dry and the biggest danger of the day was going to be dehydration and sun stroke.

The race began at the huge artificial EDF dam, and after the start we followed tarmac roads for a couple of KMs before kicking up into forest trails. There was quite an interesting traverse through an eerie moonscape of scree and pointy rocks before heading up into the forests (and shade) again. The first 5km was just a warm up and passed pretty quickly, finishing with a short, fast descent into the first aid station where I grabbed some food and took in an energy gel. We were at the lowest point of the race, and the for the next 5km were going to have to climb the best part of 1000 vertical metres up to the top of Mont Colombis – definitely the main challenge of the day. It was actually less daunting than I expected – for the first 75% of the climb the forest trails consisted of steep, but manageable switchback and I was able to keep a decent pace going – it was just simply a case of keeping the effort consistent and trying not to blow up – getting to the top would still only be less than half way through the race. The average gradient of the whole climb was 19%, so it made sense that things were going to get harder near the top and it certainly did – ramping up to 30% in places – the path turned to loose rock and it became more of a scramble. At least somebody had started to paint Tour de France style slogans to encourage us to the food stop at the top. Beautiful trails up on high, with the Lake in the distance below

There was still plenty of racing still to do, but at least with the exception of 3 small climbs, we were mostly running downhill. The race course joined the 22km section too, so I now found myself running through a lot of steep, rutted single track on a much more crowded course, but there were plenty of overtaking opportunities.

In places the course opened up to some spectacular scenery, although the speed of some of the descents made it hard to appreciate. The sun was out and the temperature was rising though the main concern was getting to the finish. Kicking up dust on the latter half of the race

Just a couple of KMs from the finish, a couple of race volunteers where pouring buckets of water over the heads of racers – this was very welcome and I made sure I got a good dousing, but I was surprised they were doing it so close to the finish. Then as the road turned and trail stepped up into the forest I realised why – just when we were all completely ready for the finish, we had another very steep climb. It was probably no longer than 1km, with maybe 75m of ascent but placed at the end of the race like that it was a tough one to deal with. The final, fast decent into the race finish down by the beach

It was soon over however, and all that was needed was a final, technical descent down a rocky path to the race finish at the beach of the lake. Encouraged by lots of tourists and other spectators, this was quite fun, and before long I was crossing the finish line in 25th place in a time of 3h35’45’.