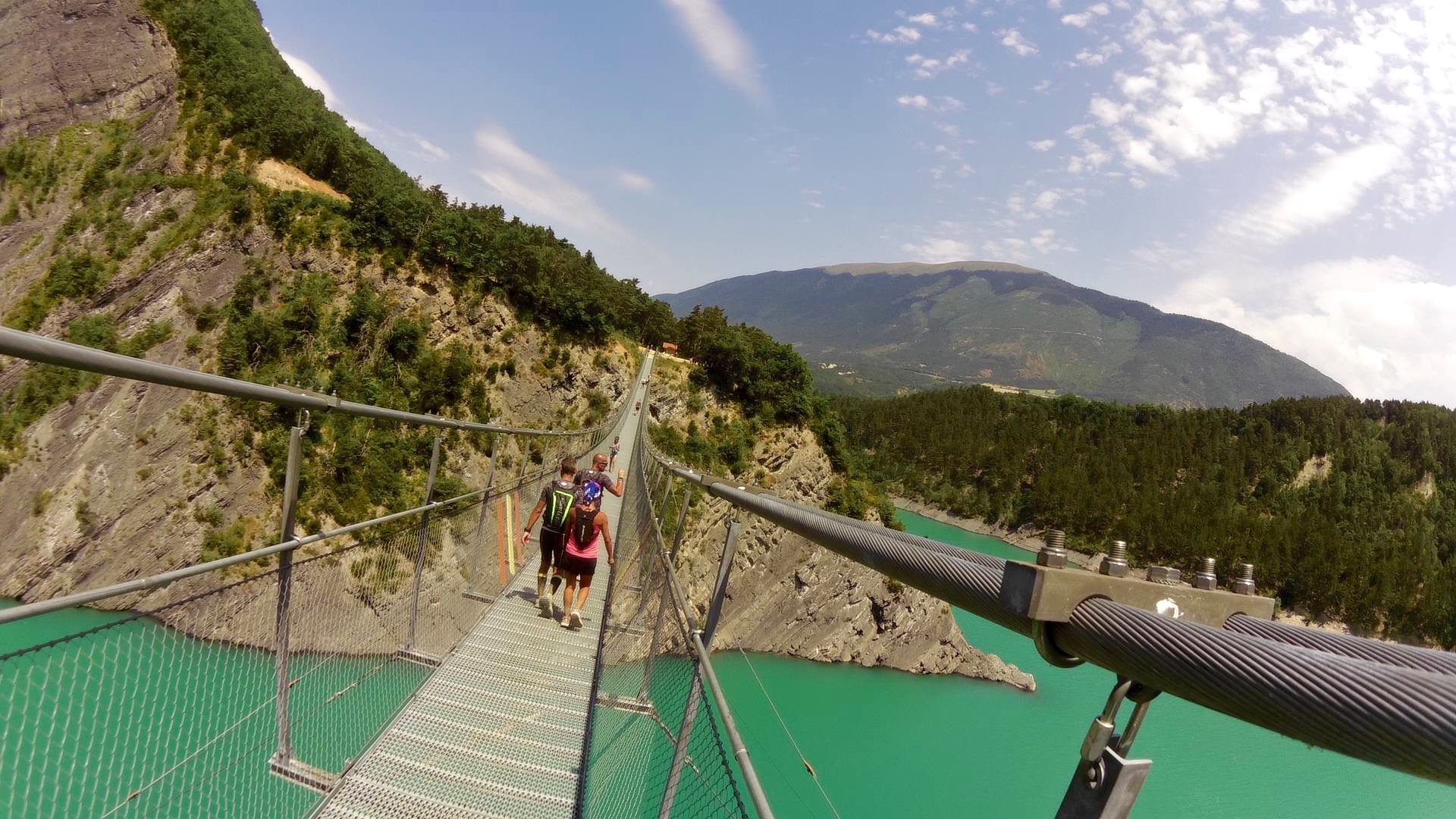 South of Grenoble lies Lac de Monteynard-Avignonet, a huge artificial lake created in 1961 after EDF dammed the Drac river to create a hydro-electric power station. Long and narrow, and bordered on all sides by mountains, it’s great leisure destination and popular for kite and windsurfing. In 2007, two Himalayan-style suspension bridges, or passerelles, were constructed to give an awe-inspiring, if vertiginous crossing over the Drac and Ebron rivers. It’s these passerelles that form part of a 57km race, and give it it’s name.

There’s a great video of the race below: Lac de Monteynard-Avignonet in the distance, taken during the race. The view is looking north-west, and you can see the famous Mont Aiguille, at quite an unusual angle, in the far distance on the skyline to the right

I’ve been to the lake many times, hiking over the bridges and taking our kayak onto the water, so when I saw that a series of races were taking place I signed up to the Trail des Passerelles du Monteynard. There’s a few options on offer; 13km, 15km, 25km, 35km, and 55km. I signed up for the 55km event (actually 57km on the day when the roadbook was published) figuring that this would be a good mid-season test. Waiting on the west bank of the lake at Treffort, for the boat to come in and shuttle us across to the start.

I live about an hour south of the lake, and since the race started at 6.30am, and also started on the opposite bank to the finish, where I would leave my car, necessitating a boat crossing, I had to set my alarm for 3.30am in order to make it on time. At least I wasn’t going to hit tourist traffic at that hour.

For the past few weeks, the French Alps have been suffering under an oppressive heatwave, and this hadn’t abated for this race – warnings were sent out by the organisers stating a minimum 1.5L reserve of water per participant, and asking runners to look out for signs of disorientation and dehydration in their fellow competitors. At 5.30am, waiting for the boat, it was already climbing up into the low 20s. Race start at Savel, on the opposite side of the lake.

After retrieving my race number and dumping my free t-shirt and the rest of my race pack with the bag drop people I boarded the boat. It was only as we disembarked that I noticed I was about the only person without a timing chip on my shoes. I hadn’t seen this mentioned anywhere in the documentation and was in such a hurry when I got my race pack that I missed it – this was confirmed by the race organisers – oh well, I just wouldn’t get an official time or any race splits – too late to worry about it now.

Race countdown, my Garmin playing up and not getting a proper satellite lock and a shuffling run out of town – so far, so normal. We were essentially running out of a holiday resort during the peak of the tourist season so the support at the start was pretty good, but pretty soon we found ourselves climbing up into the hills and away from civilisation. It was still fairly cool, and I felt good so it was a challenge to try to dial in the pace – I knew it was going to be a long day with humid conditions and temperatures forecast to hit 35ºC by lunchtime. Along the eastern edge of the lake is an old coal-carrying railway, the chemin de fer de la Mure, which was repurposed as a tourist train, but is now sadly out of action due to a landslide destroying part of the track in 2010. However this gave us the opportunity to run along the tracks, through the tunnels and get some amazing views as we did so. The first few climbs were not too challenging, and pretty soon I’d racked up 25km of distance before running into another well stocked aid station at Avellans, but before that we got to run through the old mineshafts – a discontinued mineral mine, now open as  a museum – it was lovely and cool, and all too brief before we were back out into the blazing sun. Running through the old mineshafts

After a brief descent, it was time to tackle the first nasty climb of the day, a long slog up to the Col du Sénépy. Luckily it was fairly shady for the first two-thirds of the way up, but once we got above the treeline the heat was intense. Some of the climb was steep enough to need fixed ropes as well. Climbing up to the col du Sénépy

The view from the top was fantastic, and I could see all the way to the Col des Aiguilles that frame the backdrop to my house in the valley of La Jarjatte. Windy and barren, but still very hot we picked our way through the trails. I didn’t get any pictures but during the run down into the aid station at the col, myself and two other runners were joined by several cows from a nearby herd that rather than getting out of the way, ran alongside us for several hundred meters – it was a like a very slow, mini-Pamplona.

The aid station at the Col du Sénépy was idyllic – an old shepherd hut with a local springwater being sprayed into the air to provide in-situ cool showers for runners, and lots of food and drink laid on. This couldn’t take away from the fact that what lay ahead was an organ-shaking, hot and dusty descent of around 900m – this was where I really started to feel the effects of the heat.

Reaching the bottom of the descent, a good hour or so later and I was beginning to suffer – the village hosting the aid station had a fountain, and volunteers were filling bottles with springwater and spraying hoses at runners. I sat in the shade under an awning, draping a water-soaked Buff over my head for 10 minutes to try to cool down, before heading back out again. The passerelle in the distance, spanning the Drac river

Feeling slightly refereshed I headed out again, only to start getting cramps on the climb up to the first passerelle. There was a strictly-enforced walking-pace only on the bridges, otherwise they could start swinging wildy – it was especially windy up there too. I don’t think too many people were feeling like running by that point anyway. After crossing the second bridge, and reaching the aid station I suddenly felt overwhelmed with stomach cramps and nausea. This passed after a while and so I embarked on the final climb of the day, only for the nausea to come back – with less than 7km to go, I decided to bail out.

This is the first time I’ve ever quit a race – I missed the cut off at 60km in my first ever ultra-marathon, but this time I knew that if I pushed further it wasn’t going to end well.

I’m disappointed, and keep replaying why I overcooked it. Did I go out too quickly? I don’t think so – I made conscious effort to keep the early pace easy. Did I not drink enough? I’m pretty sure I did – 4.5L of water with electrolyte tabs (plus extra at aid stations). Was I not habituated enough to the heat? Well I thought I was – I done a couple of 30km training runs in the previous couple of weeks in 30º+ temperatures.

Judging by the queues at the medical tents, and the huge number of abandonments it was obvious the weather played a part. This summer has been unusually hot for the French Alps – thankfully we’ve had thunder storms in the last couple of days to bring a bit of relief.

The event itself was wonderfully organised and supported, and I’d recommend this to anyone. The support was great and scenery and running environment was phenomenal. The event clashes with another race I’d like to do, so maybe I won’t be back next year, but I’ll definitely be back.